EMP Attacks: What they are & how to protect against them [Video] 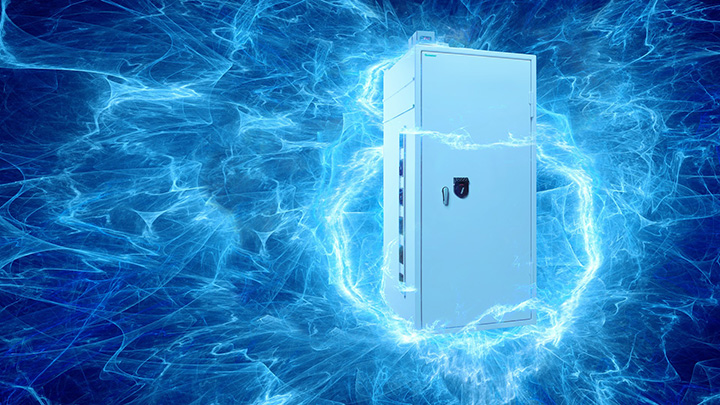 In a new video series, Gunnebo safes expert, Mark Brookes, talks about the effects of an electromagnetic pulse (EMP) on servers and what you can do to protect against it.

"EMP stands for electromagnetic pulse and it's a conducted field which has a very disruptive influence on all kinds of electronic material," explains Mark.

"It can be natural and it can be man-made. Natural occurrences such as solar flares or electrical storms can send a pulse of electricity down a cable or the power grid. Normal power line protection, like circuit breakers, make sure that that surge never gets to your equipment."

EMPs can even be generated by portable, handheld devices

"EMP can also be man-made and there are various ways of generating man-made EMP. One example is from a nuclear detonation. Where that is perfected and taken high up into the atmosphere, it is know as 'high-altitude' EMP or 'HEMP'. Since the detonation takes place from such a height, it covers a wide area."

"On a lower level, there are battlefield munitions that are designed to generate EMP and there are number of man-made portable generators that could be drone-based or no bigger than a small carry-on suitcase."

Part 2: What are the consequences of an EMP attack? (3 min watch)

"An attack following any kind of nuclear device, whilst the possibility is always present, is not that likely," explains Mark. "What is more likely is an attack from a dedicated device carried by hand or in a vehicle. There are lots of ways of taking out control systems with a targeted and focused electromagnetic pulse. This could be used tactically by the military or for pure disruption of a site such as an airport."

"The consequences of an EMP attack range from mild disruption to total breakdown. A serious attack on a large scale could take out control systems across an entire continent, sending it back into the dark ages."

"For IT equipment, the first thing you will notice is that any screens will start to go fuzzy and cut out completely. Depending on the strength of the attack, you will basically lose your servers. The conducted energy that goes through those servers will simply fry their circuits. At best it's recoverable in time, but usually the system is down completely and needs replacing."

Part 3: How to protect IT equipment against EMP radiation (1 min watch)

"When it comes to protection," concludes Mark, "The first thing to do is take a good review of the security systems that you have in place now and see how your servers are protected."

Protect your servers with the right kind of pulse-shielding

"The room itself or the building can be made EMP-proof, but that is expensive. It's much better to look at individual server installations and protect them with the right kind of pulse-shielding. Any electric cable which goes into your server is a possible conductor of an EMP so isolate all of those cables and have connectivity via fibre-optic cables which will not conduct that pulse."